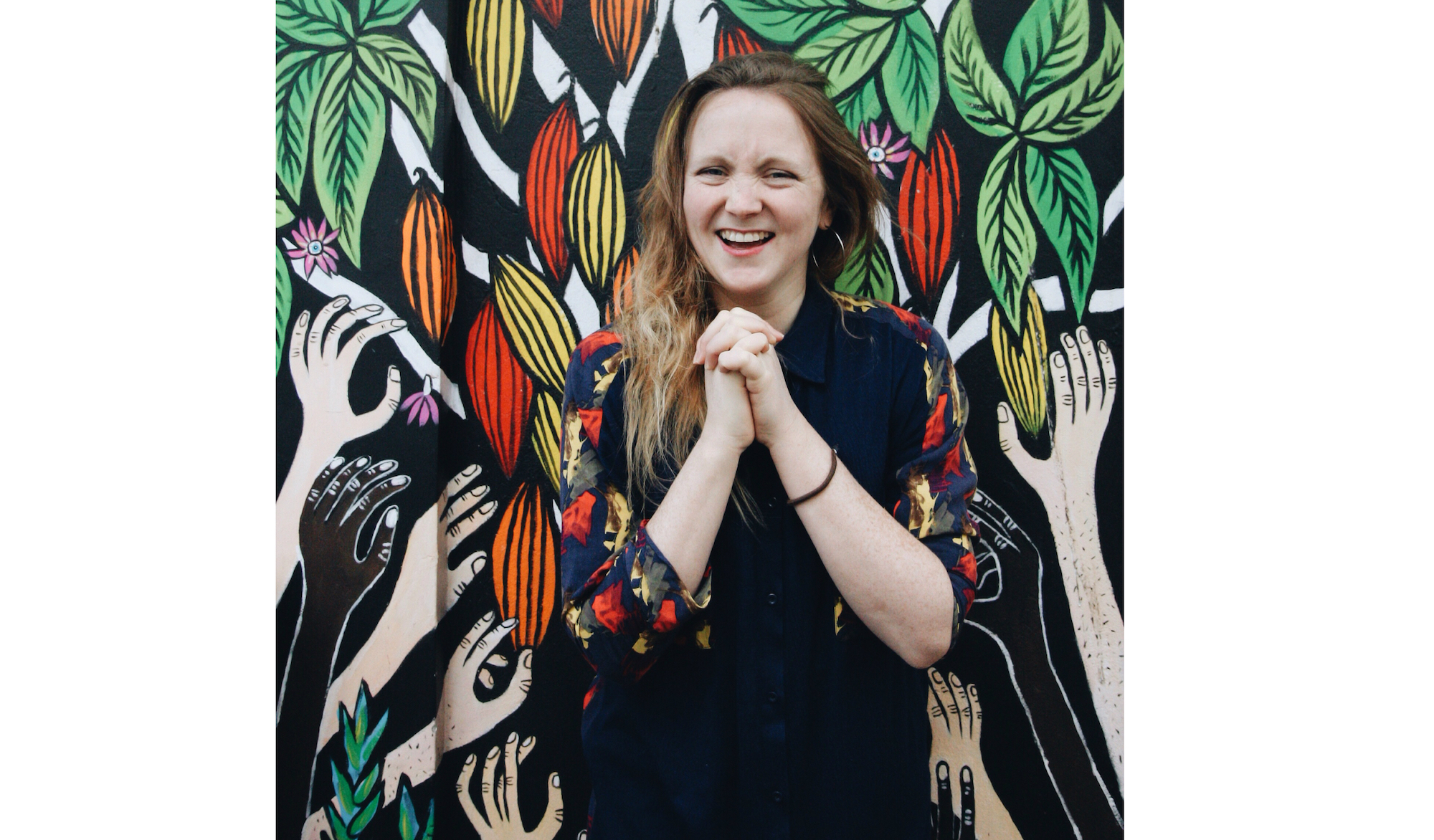 Hollie McNish is author of the award-winning book, Nobody Told Me (which we recently reviewed) – a heartfelt portrait of new motherhood comprised of diary entries and poems. Here she discusses some the themes of her fantastic book – the transformation we go through as mothers and why there’s still secrecy surrounding the more challenging realities…

Starting with the title Nobody Told Me, why do you think there is so much secrecy about the more challenging aspects of pregnancy and parenthood? Do you think things are getting better?

I do think things are getting better yes. Obviously it’s hard to judge that as I’ve only experienced it all at one time but speaking to my mum and, especially, my gran, who wasn’t even allowed to mention the bleeding or where babies came out of, I’m pretty certain things are improving. Just not enough.

Some people say that the secrecy is because you don’t want to spoil a woman’s experience by describing lots of practicalities but I think it’s way more cultural, social and sexist than that. I think it stems from hundreds of years of a ‘sugar and spice and all things nice’ sort of lady mentality, which means women talk very little – or historically have spoken very little – about the pains, sickness, diarrhoea, backache, blood and fear in the process of growing and birthing a baby. I’m not saying it’s not a beautiful thing – or can be – but the physically grimier side of it I think is underplayed because of history more than anything. The same way that period blood is the most censored form of blood on screen for example. These are all ‘norms’ but they have been created as such by social inequality. In my opinion.

Motherhood – women, in general – have been deemed part of the domestic / private sphere – and their worlds, including their blood, birth, menopause, often abuse – deemed part of that. Whereas men’s worlds have been seen as part of the public sphere. I think the fact that for centuries women’s stories have also – perhaps for this reason – been deemed non-literary or uninteresting also plays a huge part. The sort of ‘who wants to hear about that?!’ insecurity.

You explore the theme of identity, of the transformation mothers undergo as they leave their old lives behind. What was the biggest difference for you? How important is it to make time for yourself?

I guess I wouldn’t say ‘leave their old lives behind’. I find this idea too sad really and for me, I haven’t. I feel like I’ve added to my old life. A bit like the idea we’ve ‘lost our pre-mum bodies’ rather than added to them.

Time is hands down the biggest difference. And the knowledge, which at times made me so claustrophobic, that this, I hope, is a responsibility which is forever. Like forever. Like never again can I just fuck off and travel around the world. I say again but I’ve never gone travelling like that. So I guess, never. Or at least not for a long time. That weight is extraordinary I think. Especially when they start school and it is doubly fucked!

Making time for yourself is crucial. But not feeling guilty about it is maybe more crucial. I felt so guilty in the first years to even ask for an hour to do nothing. I think more and more dads get this too but it is still, too often I think, seen as a mum thing. ‘Me time’ I don’t often here as a male phrase. I always remember in childhood my dad and other dads just assumed Saturday was hockey day and Sunday they could fish or play golf or watch the football because apparently those things are like vital and trump all other responsibility. When I had a kid and I thought back to that I wanted to go back and slap the shit out of all those fathers. I think those things are changing though I still think there are so few stereotypically ‘givens’ for mums to just have to do. I think the tiresome and boring nature of having to request and orgainse free time is hard. I have it easy in that respect. But I know mums who have never had a night away and their kids are nearing ten and I genuine believe I would’ve been ill if that was me.

You talk beautifully about how the relationship with your own mother changed. Can you share a little about that?

We’ve always had a great relationship but i just realised how much she did. Like really how much. I think it struck me most at Christmas when I realised that, in my family, all of the setting up, the wrapping, the writing cards, the posting, the cooking, all of it was done by mum, but still on every card either the words ‘love Santa’ or ‘love mum and dad’ were written. I remember thinking it was hilarious that my gran used to sign all of our birthday cards and letters ‘love gran (and grandad). I thought the brackets were so rude. Until I became a mum and realised she was just desperate for getting the credit for the work she did. Like when your boss takes your ideas as theirs I guess. There was a lot of that in motherhood in the people I saw. The men had higher salaries and this justified everything else. So yeah, I realised she had slogged for years just so we could stuff our faces and open presents round a tree.

Also – I guess I realise how boring a lot of the parts of parenting that mum mainly did were. The day to day playing at the level of a baby or toddler’s intelligence. I think there’s still a hint of sexism in the people that seem to think that a woman, rather than a man, is more adept and enjoys playing peekaboo for five hours at a time. I know things are changing and they changed in my co-parenting but I still see this a hell of a lot. Mind you, I don’t live in a city, where I’m told things are a little more equal.

Did you find that becoming a mother changed the creative process for you?

Yeah, I had to do it quicker! But really, not too much, except the practicalities of where and what times to work and also wanting to punch people in the face who tell me the best way to write a book is to go to a quiet cottage somewhere for a few months. That is definitely the most annoying advice I’ve ever been given as a writer!!

I loved your poem Wow! as your daughter looks at her body for the first time, which I read during a moment of low body confidence. How did you cope with the societal pressure to bounce back into shape?

Oh god who knows, it’s so engrained isn’t it; for mums and women in general, and men and everyone. It’s hard to fight against a multi-billion pound operation reliant on us feeling unfulfilled and ugly. I guess the main way is by writing and making jokes and reminding myself that it is unreal and that sooner or later we all die and that I’m not going to hand my life over to someone trying to make money from my body insecurities, because there’s too much fun stuff or kind stuff and interesting stuff to do instead. Don’t get me wrong, I still look in the mirror and think fuck a lot of the time. But then I slap my face and look out the window instead. And sometimes picture a big greedy bastard like Trump rubbing his fingers at me trying to get me to buy all his shit and that makes me feel more determined not to bother about it all!

What advice would you give to a first time mum?

Go to a group, even if you thing you won’t fit in. I didn’t do antenatal classes and it took me a good while to go to a local baby group because it was in a church in a village and I wasn’t married and I was a bit younger and I had all these reasons why I wouldn’t fit in. But when I went, even though it was fucking awkward for ages, it was also amazing. A few people I know went to these groups and hated it because all the mums talked about were their babies. To that I’d say they were probably all thinking the same. That’s a safe go to topic. If you want to talk about something else, start the conversation yourself, don’t just get defensive and assume everyone is loving talking about babygros for hours.

Also, I think, remember you are allowed to take up space; you are allowed to be in a cafe, on the bus, in the train. Society can make you feel like shit as a new parent in the UK – like your buggy is too wide or your baby is too loud or you are asking too much by heating your bottle or getting out your tits in public but remember everyone was a baby once and you’ve done nothing wrong and you are allowed to leave your house.

Nobody Told Me by Hollie McNish is published by Little Brown